A week after the election, Katie Couric is feeling good…  After a series of outstanding political interviews, she helmed her first Election Night, guiding viewers calmly through the emerging results, using her live-TV experience to cope with the hurry-up-and-wait pace, fielding her team of commentators with generosity and skill…

The “milestone for this country,” as she described the outcome at the polls, has been a milestone for Couric, too.

The Palin Effect
It would not be an overstatement to say that Couric’s two-part interview with Sarah Palin in October changed the course of the election. Not in its final result, perhaps, but certainly in sharpening opinion around the polarizing figure of the Republican vice-presidential nominee. “An interview like that doesn’t come along very often,” Couric says now. “It was sort of a perfect storm in terms of timing, interest, my approach, all working together to make it impactful.”

While many liberals credit Couric, ably assisted by Tina Fey, with taking Palin down, Couric herself is adamant that the merit of the interview lay in her determination to “remain nonjudgmental. I was just a conduit to get her point of view out there.” Asked what went through her head as she asked the questions, she says, “I haven’t really talked about this.…It was fascinating for me to watch her formulate answers, and clearly she was struggling in some of the areas we discussed. I couldn’t understand why she didn’t want to say what she read.…But really I just wanted to listen to what she said.”

In a postelection interview with CNN’s Larry King, Palin acknowledged that Couric’s questions were “fair,” while dismissing as “ridiculous” the notion that the interview precipitated the downfall of the Republican campaign.

The Obama Effect
Couric’s vindication has highlighted the value of excellent journalism. If Obama’s victory was, as he said, “not about me,” Couric’s ability to keep herself “out of the equation and remain as objective as possible” during election season has finally earned her the right she sought to claim from the outset: to be trusted as the custodian of the evening news. She has shown herself to be a safe pair of hands.

“I’ve always thought if you worry about what job you are going to eventually have,” she says, “you don’t perform very well in the here and now.”

And that, after all, is what the news is all about. 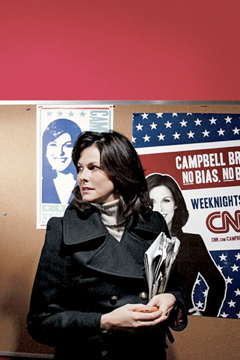 CAMPBELL BROWN
In the CNN studio not long before Election Night, I watched Campbell Brown interview Madeleine Albright for her show, Campbell Brown: No Bias. No Bull.  Tall, energetic, and somehow willowy although three months pregnant, Brown exuded such forthright cogency and positive cheer that even the gloomy Albright seemed heartened. Brown asked Albright to touch on the problems facing the next president. The former secretary of State launched into an urgent list: the international financial crisis, the handling of terrorism, the broken nuclear non-proliferation treaty, globalization, energy, food prices, climate change, wars in Iraq and Afghanistan, the problems posed by North Korea, the Middle East, and Pakistan. At the end, Albright leaned forward and said, “You’ve been great” and added, “You have to be who you are, and you’ve been doing it brilliantly.”

“People are more intelligent than television would have them be,” said Brown.

She slipped into the anchor’s chair of CNN’sElection Center in time for Super Tuesday last February, and found her voice. Over the next months, her editorial pleas for rational thought and her probing of guests created viral Internet clips and Election Night ratings that pulled CNN out of the cable fog and put it on a par with ABC. By October 21, Election Center was renamed Campbell Brown: No Bias. No Bull.

She had asked the McCain campaign to make Palin’s qualifications clear, and when the hapless spokesman Tucker Bounds fed her reams of electioneering pap instead of answers, she just kept asking and smiling, a lot like Barack Obama during a debate. At the end she let the poor man off the hook with “I’m gonna just give it to you, baby,” but McCain canceled his planned visit to CNN.

The other cable news shows on Fox and MSNBC are clearly defined outlets of the left and the right. “My competition have an automatic punching bag,” Brown says, “and an audience that wants their opinions validated each night. We finally learned to articulate things; I found a freedom because I am able to do commentary at the beginning.” She does not attack, but she challenges. To Elizabeth Dole, on the occasion of her “Godless” ads against her opponent: “We’re fighting two wars, our economy is a disaster.…Cut it out, reclaim your dignity. Please, please, just tell us what you think you can do to help get this country back on track.”