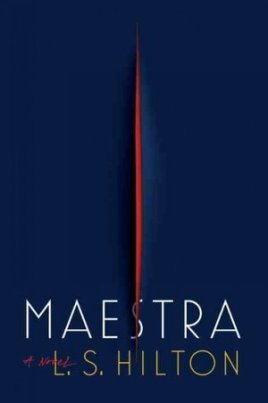 Judith Rashleigh works as an assistant in a prestigious London auction house, but her dreams of breaking into the art world have been gradually dulled by the blunt forces of snobbery and corruption. To make ends meet she moonlights as a hostess in one of the West End’s less salubrious bars – although her work there pales against her activities on nights off.

When Judith stumbles across a conspiracy at her auction house, she is fired before she can expose the fraud. In desperation, she accepts an offer from one of the bar’s clients to accompany him to the French Riviera. But when an ill-advised attempt to slip him sedatives has momentous consequences, Judith finds herself fleeing for her life.

Now alone and in danger, all Judith has to rely on is her consummate ability to fake it amongst the rich and famous – and the inside track on the hugely lucrative art fraud that triggered her dismissal.

I might be one of the few people who enjoyed Maestra by L.S. Hilton. But I’ve noticed that some of my favorite books with anti-heroines get rated poorly because readers personally hate the women.  But I like my book heroines with a little bite. Is there anyone that jumps off the page more? Is there anyone more alive and fascinating to read?

“…I didn’t resent the Ruperts of the world, and I wasn’t insecure enough to despise them. Hate is better. Hate keeps you cold, keeps you moving fast, keeps you lonely. If you need to make yourself into someone else, loneliness is a good place to start.”

Judith is studious, calculating, and intelligent. She jumps from one unlikely scenario to the next. But I was hooked. I wanted to see what she would do. And reader: she does some things…

Judith’s ambition and longing drive this novel. Hilton really pulls you into the worlds which Judith DESPERATELY wants to be a part of. It’s over the top, insane, and glamorous to the highest degree. Great escapism. Jackie Collins would be proud.

As for the much talked about sex scenes, it wasn’t that shocking to me. Though, she does use the word, c**t a whole lot. But those scenes won’t be that scandalous to any devout erotica or romance reader, which I am.

One drawback is that Hilton’s writing lacks the skill of Gillian Flynn or Megan Abbott. Her long-winded style slows the story at points, but aside from that I’d say the hype was real.

I recommend Maestra but not if you’re uptight! This book is not for the faint of heart.

I will definitely be checking out Judith’s psychotic schemes in book 2!